David Dickson and the protests against the prayer book 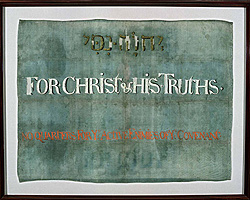 David Dickson was born in 1583 and was minister in Irvine before becoming a Professor of theology at Glasgow University. Along with Alexander Henderson, David Dickson led the protests against the Book of Common Prayer in 1637 after the first attempt to read it had been interrupted by Jenny Geddes. They had planned the opposition to the prayer book in the months before it was introduced, and now Dickson helped organise petitions to the privy council against the prayer book. These protests condemned the prayer book as containing errors and being forced on the church without having the approval of a General Assembly or Parliament. The privy council wrote to the king telling him of the opposition to the prayer book from all sorts of people from different parts of the country.

On the 17th of October, the king ordered that all the protestors were to leave Edinburgh within 24 hours. However the nobles, lairds and ministers stayed on to present another protest. They handed in this ‘Supplication’, signed by many of the most important people in Scotland, and then returned home. The Supplication protested not just against the prayer book, but also the Book of Canons and the bishops themselves.