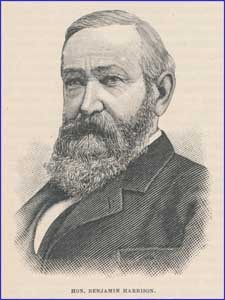 By Rev. David T. Myers - Posted at This Day in Presbyterian History:

Due to Divine Providence

Ruling Elder Benjamin Harrison was seen doing his normal elder duties that Lord’s Day on March 3, 1889, which was, collecting the morning tithes and offerings in the worship service of the First Presbyterian Church of Indianapolis, Indiana. However, this Christian Presbyterian was no normal elder. The next day, March 4, he would be inaugurated as the twenty-third President of the United States!

Coming from a distinguished Virginia family, Benjamin Harrison was the grandson of William Henry Harrison, who was the ninth President of the United States. But William Henry Harrison was in office for just one month, dying on his 32nd day in office from pneumonia. Despite that brief term, the two Harrisons remain the only grand father – grandson relationship in our republic’s history. And adding to their heritage, an earlier ancestor of theirs, Benjamin Harrison V [1726-1791] was one of the signers of the Declaration of Independence.