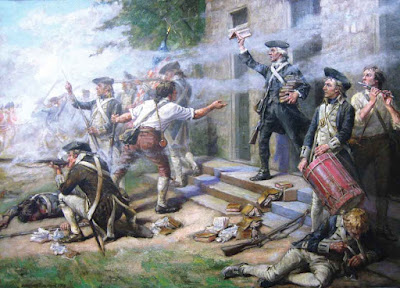 "Call this war by whatever name you may, only call it not an American Rebellion: it is nothing more or less than a Scotch-Irish Presbyterian Rebellion.”

“Who’s that riding in on horse-back?
Parson Caldwell, boys; Hooray!
Red-coats call him “Fighting Chaplain,”
How they hate him! Well they may!”


The American War for Independence was on the edge of disaster entering 1780. “Not worth a Continental” had entered the lexicon due to the staggering devaluation of the American currency. More than six hundred had deserted Washington’s army in Morristown, New Jersey, helped along by a more severe winter than that suffered at Valley Forge. Pockets of mutiny had sprung up throughout the winter and into the spring. Then, in May, 1780, Charleston, South Carolina, fell to British General Charles Cornwallis.

Emboldened by the General’s success, and intelligence that suggested the colonial militia would not turn out, Loyalists urged the British commanders to mount an invasion and with one stroke inflict a mortal wound that would end the five-year old war. The British agreed and launched an invasion in June.


Worried that Clinton might strike West Point, Washington led a train of wagons to resupply the post, leaving General Nathanael Greene in charge. Clinton sent Lieutenant General Baron Wilhelm von Knyphausen, a Hessian general, towards Springfield, five thousand strong. As Knyphausen marches down the main turnpike, he is met by American Colonel Israel Angell, bunkered down in an apple grove across the Rahway River. The Redcoats move up and let loose a furious volley, using 6 artillery pieces. The broadside tears off chunks of the apple trees and kills the Regiment’s lone artillery gunner. Despite the crucial loss, Colonel Angell held off a force five times larger than his own for twenty-five minutes. In the middle of the battle, an out-of-place figure—a chaplain, no less—strode up and down behind the line, shouting encouragement. When the marksmen ran low on wadding for their muskets, Rev. James Caldwell raced on his horse back to town, entered the Presbyterian church, grabbing stacks of hymnals (of which most of the songs had been written by Isaac Watts). Returning to the front line, Caldwell handed out the hymnals shouting, “Here, give ‘em Watts, boys. Put Watts into them, boys!”1 The boys responded and poured lead into the oncoming enemy.

James Caldwell’s legendary deed did not turn the course of battle that day. At best, it delayed the invasion of Springfield by a few minutes. But the event stirred such patriotic fervor that those who witnessed it passed it on to succeeding generations until Washington Irving recorded it in his biography of George Washington. For the “Fighting Chaplain,” it was just one more selfless act in a life full of courage, patriotism, and disinterested service to others and God.