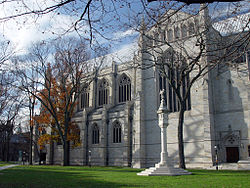 By David Calhoun - Posted at A Place for Truth:

The Synod of Dort summed up the soteriology of Calvinism in five points. In this article I will sum up the legacy of Old Princeton Seminary in six points.

On the last New Year’s day of his life, Charles Hodge was visited by one of the seminary students, who asked for a motto. The old man wrote in a firm hand and with large letters, “Thy word is truth.”

Charles Hodge and the other Princeton professors believed that the Bible was the infallible Word of God. They maintained that the Bible itself claimed that it was completely true, that Jesus believed it to be entirely trustworthy, and that the whole Christian church, until recent times, had held it to be absolutely authoritative.

In 1825 Charles Hodge began the Biblical Repertory “to render accessible to American readers some of the fruits of mature learning of English and German scholars.” Soon the journal included original articles by the Princeton professors and others on a broad range of biblical and theological topics, along with solid contributions on science, philosophy, geography, literature, and history. About twenty percent of the articles published in the Princeton journal during the heyday of Charles Hodge’s editorship addressed scientific issues.

In a sermon preached to the Princeton students on John 1: 14, Warfield said that Christians must “cultivate an attitude of courage” in pursuit of truth, not leaving the field to unbelievers and enemies of the church. For over a hundred years the Biblical Repertory and its successors set forth the Princeton call to bring all learning into subjection to Christ so that in all things he might have the preeminence.