John Knox: The Making of a Reformer 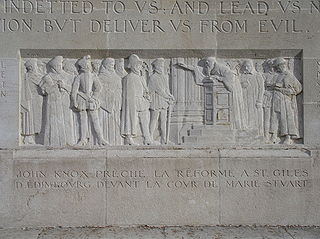 By Gervase N. Charmley - Posted at The Banner of Truth:

Of all the major Reformers, John Knox is the one about whose early life we know the least – a fact that may come as a surprise since he wrote a History of the Reformation in Scotland.1 We cannot even be certain of the year in which he was born; it was either 1514 or 1515, but the day is completely unknown. Until the last century, it was generally believed that he was born in 1505, the date given by Thomas M’Crie, an error that serves to illustrate how little we know of Knox before he became a Reformer. The mistake was in part the result of mistaking another man of the same name, who was a student in Glasgow in 1522, for the Reformer.

The place of his birth we do know for certain; it was in a house, long since vanished, in Giffordgate, a street in the then thriving and prosperous town of Haddington, across the river Tyne from the great church of St. Mary, which was called ‘The Lamp of the Lothians.’ When he called himself ‘Tinoterius’, the man from the banks of the river Tyne, Knox was being quite literal. We know relatively little of his parents, but his mother was a Sinclair, and his father was a merchant, a member of the Scots middle classes. For several generations the Knoxes had been tenants of the Earls of Bothwell; they were a respectable family, fully integrated into the complex networks of medieval Scottish society.

How John Knox came to be a Roman Catholic priest we do not know; as a younger son, he would have had to find his own way in the world, and ‘going into the Church’ was always an option for a young man in that era. Such a move does not necessarily indicate any particularly pious tendencies either on his own part or that of his parents; those with really pious tendencies entered one of the monastic orders, while a secular priest might pursue a much more worldly career, as did Cardinal David Beaton, born some twenty years before Knox, who was more a politician than a churchman. Then, as in subsequent generations, a man might enter the priesthood so as to be able to pursue a career in some other field, while receiving the income of a number of benefices and paying others to carry out the actual work.

John Knox probably began his education at the song-school attached to St. Mary’s Church in Haddington, crossing the old Nungate bridge from his home every morning. At the school he would have been taught to read from the liturgical books in the church, and the daily round of Psalms, sung of course in Latin, would have become quite familiar to him. There, as he learned to sing, he learned also the skills that would enable him as a preacher to be heard by packed congregations. There, among the intricately-carved oak choir stalls, the windows glowing with stained glass, and the smell of incense, he learned to love the Psalms, and for the rest of his life they would lend their language to his devotions. When we realise that his formative years were spent in the midst of the glories of medieval Catholic worship, we come to realise that his later denunciations of that worship were not ignorant – he knew whereof he spoke. It is a striking fact that all of the principal Reformers came not from the fringes of the late medieval church, but from its centre.