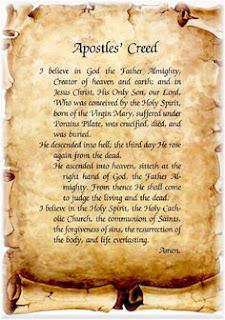 By David Clark Brand - Posted at The Christian Observer:

I will look with favor on the faithful in the land, that they may dwell with me;
He who walks in the way that is blameless shall minister to me.
No one who practices deceit shall dwell in my house;
no one who utters lies shall continue before my eyes. Psalm 101:6-7

The Evangelical United Brethren pastor was visiting the writer’s childhood home. Mother inquired about the use of the word “catholic” in the Apostles’ Creed during the Sunday morning worship hour. Pastor Ralph Steese explained that the word “catholic” simply meant “universal,” and on that basis, it was perfectly okay for Protestants to affirm the words of the Apostles’ Creed: “I believe in the holy catholic church.” The church’s catholicity reflects its apostolicity in the sense that it defines the church as God Himself established it through the testimony of the apostles[1] on the foundation of Jesus Christ [2] in its local expression, worldwide, throughout all time, and extending into eternity. Just as an automobile would be dead in its tracks without its “universal,” so a congregation ceases to be the church of Jesus Christ if it abandons its catholicity, i.e., if it veers from the truth, as the Scriptures define “truth.” [3]

That is the sense in which Ignatius, Bishop of Antioch, [4] first used the Greek word for “catholic” around 112 A.D.:

Wheresoever the bishop appears, there let the people be, even as, wheresoever Christ Jesus is, there is the Catholic Church. [5]

Ignatius was advising the church of Smyrna to be attentive to their presiding elder. The apostles had appointed overseers or bishops, also designated elders and pastors. By the time of Ignatius’s letter, the Greek episcopos (bishop or overseer) designated the presiding elder (presbuteros), much as the term “pastor” designates the primary teaching and preaching elder in many Protestant churches today. The Greek word in Acts 14:23, rendered “appoint” in the English Standard Version, literally means “to elect by a show of hands.” The apostle Paul entrusted such congregationally-approved appointees with “the whole counsel of God,” and commanded them to “pay careful attention to yourselves and to all the flock, in which the Holy Spirit has made you overseers, [and] to care for the church of God, which he obtained with his own blood.” Before commending them “to God and to the word of his grace,” Paul solemnly warned them that after his departure “fierce wolves will come in among you, not sparing the flock” and that even “from among your own selves will arise men speaking twisted things, to draw away disciples after them.” [6]