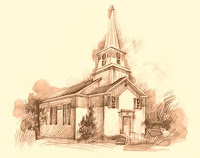 One would need a firm grip on God’s sovereignty to live and minister in the early days of our country. It was true that countless Scot-Irish families resided throughout the regions of colonial America. But it was also true that whereas there were many members of the Presbyterian faith, under-shepherds to care for them were few indeed. So when a colony of Presbyterians found a pastor, he usually stayed a long time. Such was the case for the Rev. Adam Boyd.

Born in Ballymoney, Ireland in 1692, he moved first to New England in either 1722 or 1723. Recommended by the venerable Cotton Mather, he was called by the Scots-Irish people at Octoraro and Pequea, Pennsylvania churches. Ordained to the gospel ministry on October 13th, he began his ministry to the people of this new colony. It was an extensive field of labor, to which by foot and horseback, he visited the people faithfully as he cared for the spiritual needs.

A week after his ordination, at the age of thirty-two, he married Jane Craighead, the daughter of their first pastor, Rev. Alexander Craighead. From their marriage, ten children—five sons and five daughters—were born.