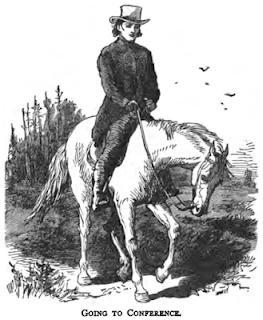 Indiana celebrates its bicentennial of statehood this year. Amid all the various commemorations, it’s good to look at our theological roots; we’re still partly shaped by them. Indiana became the nineteenth state while the influence of the Second Great Awakening rippled northward from the Cane Ridge Revival (1801) in Kentucky. Arminianism took hold amid the fervor to take the gospel to the frontier; the reformed doctrine of John Calvin found little foothold by comparison.

Some Presbyterians abandoned their reformed theology and became Cumberland Presbyterians as they migrated to the Hoosier state. Thousands more left Presbyterianism altogether and began the Stone-Campbell Movement or the Restoration Movement of the Disciples of Christ. Stronger still were Arminian Baptists who tended to minimize the importance of education and relied especially on emotion in their pleas to the unconverted. But the Methodists converted the state more than any other with their methodical emphasis and missionary zeal. They sent missionaries to the Indiana frontier in droves and quickly structured life for communities, emphasized methods of the Christian life, and established rudimentary educational systems among wilderness people. All of these groups shaped the theology of the state with their commitment to Arminianism, and their influence is still widely evident. Today, the landscape has changed and is changing, but it’s helpful to know where we started.