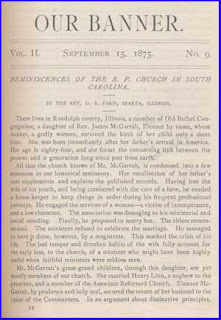 Some have heard of the small American denomination known as the Reformed Presbyterian Church and how they took a early stand against the practice of slavery. But few have read any of the story of what was involved, what it cost to take that stand, and the blessings that followed from their Scriptural obedience. It would make an interesting study, to ask how it was that this Church saw such near-unanimous obedience in standing true to the Scriptures and against the prevailing culture. I would argue that what we read here is the proper exercise of that doctrine known as the Spirituality of the Church, in which the Church exercises its God-given authority and effectively disciplines sin where it finds it.

Our post today comes from the September 1875 issue of Our Banner, a publication of the Reformed Presbyterian Church of North America.

Extracts of Minutes of the Committee of the Reformed Presbytery, on the Subject of Slavery.—Minutes of February 11, 1801.


“A petition came in requesting a reconsideration of the business respecting slaveholders, so far as this species of traffic might be supposed to affect Christian communion—and that such steps might be taken in the premises, as should place that whole affair on such a moral basis as the principles of our common profession, seem imperiously to demand.” “It was agreed prior to the further consideration of this subject that all slave-holders in the communion of this church, should be warned to attend the next meeting of the Committee, and that there the merits of the petition aforementioned, shall be particularly attended to.