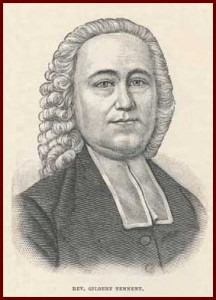 By Rev. David T. Myers - Posted at This Day in Presbyterian History:

Today in Presbyterian History we celebrate the birth of Gilbert Tennent. Subscribers to our posts will remember his name and history as the celebrated pastor-evangelist of the First Great Awakening in the American colonies. His name will always be remembered as the one who preached about the dangers of unconverted ministers. He both began and ended the New Side wing of the American Presbyterian church in the mid-seventeen hundreds. And he was born on this day, February 5, in County Armagh, Ireland, in the year 1703.

He was to stay with his father and mother, William and Catherine Tennent, in Ireland for the first fourteen years, before the entire family emigrated to the American colonies, and specifically Pennsylvania, due to connections of a close family member of his mother.

We read very little of his early life with the exception of the one great spiritual experience which brought him to Christ around the age of fourteen. He had a serious concern about his salvation around that time. Indeed his mind and heart was in a great agony of spirit. Finally, it pleased the Lord to give him the light of the knowledge of saving grace.

It is clear that what led up to this saving knowledge was the godly training he received in his home schooling by his parents. Both of his parents, beside being Christians, were Christians of the Presbyterian faith. It is true that his father, William, was then a deacon in the Anglican church, albeit Presbyterian in theology and government. When the latter emigrated to America, he immediately sought acceptance in the Presbyterian Church. Further, Gilbert’s mother, Catherine nee Kennedy, was a daughter of a Presbyterian minister.