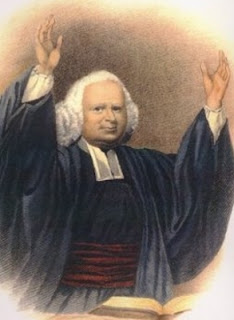 By David Clark Brand - Posted at The Christian Observer:

"So Barnabas went to Tarsus to look for Saul, and when he had found him, he brought him to Antioch. For a whole year they met with the church and taught a great many people. And in Antioch the disciples were first called Christians."
– Acts 11:25-26 ESV

America’s First Great Awakening was identified by Harvard’s Perry Miller as “the first colonial event.” In the midst of this event George Whitefield (1714-70), aware that his friend John Wesley had adopted Arminian theology, wrote to this Methodist leader urging him to stay in England. Whitefield explained that in America God was blessing the biblical message as it had been expounded by the incomparable scholar John Calvin. [1] In fact, the 1734 revival at Northampton, Massachusetts, which preceded Whitefield’s preaching tour, was precipitated by Jonathan Edwards’ preaching on the subject of “Justification by Faith Alone.” Whitefield’s evangelistic tour stretched from South Carolina to Maine. His New England ministry concluded with a crowd of 30,000 people on the Boston Commons. Later that year Gilbert Tennent’s three-month preaching tour of New England took place (at the urging of Whitefield himself). Tennent, along with his brothers, had been trained for Christian ministry in his father’s “Log College” –which in time became the “College of New Jersey” (later Princeton).

In 1743, James Davenport, great-grandson of the founder of New Haven, Connecticut, independently conducted his own flamboyant preaching tour of New England. Davenport was judged mentally deranged both at Hartford and Boston before returning to New London, where he founded a separatist church and conducted a public book-burning ceremony destroying the works of reputable New England pastors. History records his 1744 Confessions and Retractions and his later parish service.

New England Congregationalists soon divided into “Old Light” and “New Light” camps. As early as 1741, Presbyterians had divided into “Old Side” and “New Side” on the basis of their response to Gilbert Tennent’s famous sermon entitled “The Dangers of an Unconverted Ministry.” Those Scotch-Irish Presbyterians who formed the “Old Side” strictly subscribed to the Westminster Standards. The “New Side” Presbyterians who embraced the revival preaching of the Tennents affirmed the “sum and substance” of the Westminster Standards. Ironically, the healing of the 1741 Presbyterian rift took place in 1758 at a combined synod meeting in Philadelphia where Gilbert Tennent served as moderator.