Posted at The Continuing Story: 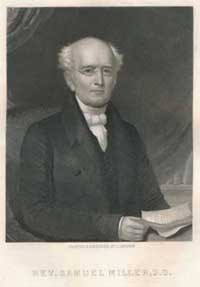 I found this interesting. In 1808, Dr. Samuel Miller wrote to President Thomas Jefferson, suggesting that the President declare a day of fasting and prayer. This would have been at a point in time when Miller was a pastor in New York City, and prior to his 1813 appointment to serve as a professor at the Princeton Theological Seminary. President Jefferson replied to Miller in a somewhat lengthy letter, declining the suggestion and stating his principles for doing so. While Jefferson’s reasoning is interesting in itself, particularly in contrast with the conduct of contemporary politics, Miller’s later (1833) assessment of Jefferson is also worthy of reflection. We might also examine whether, or how, Miller’s conclusion that “It was wrong for a minister of the gospel to seek any intercourse with such a man,” reflects on current discussions about the doctrine of the spirituality of the Church.

[The short version of this matter is posted here first. For those that want to read deeper, there was a fuller discussion of the subject earlier in Miller’s biography, reproduced below.] 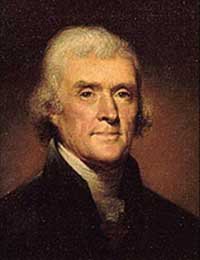 Mr. Jefferson was approaching the commencement of his last year in the Presidency, when Dr. Miller wrote to him a letter, and received a reply, in regard to which, after the lapse of twenty-five years, the latter made the following memorandum:–


“I can never read this letter [Mr. Jefferson’s] but with regret and shame. At the time in which it was written, I was a warm and zealous partizan in favor of Mr. Jefferson’s administration.. I substantially agreed with him in political principles, without being aware of the rottenness of his moral and religious opinions. I had written to him, urging him to recommend to the nation a day of religious observance, on account of the peculiarly solemn and interesting circumstances, in which we were placed as a people. I informed him that a number of serious persons, (clergymen and others,) of different denominations, had thoughts of formally addressing him on the subject, and, as a body, requesting him to appoint a day of special prayer. I stated that I was very desirous of his appointing such a day, and had thought of uniting in the effort to secure a joint address; but that, before doing so, I wished to know, whether it would be disagreeable to him to receive such an application; assuring him that neither I nor my associates in this plan, had any wish to embarrass him; and that, if it would give him pain to be thus addressed, I would endeavor to prevent the adoption of the proposed measure. To this communication his letter was an answer.

‘ I now (1833) feel, that I was utterly wrong in thus writing; and, if I had known the real character of the man, I should never have done it. It was wrong for a minister of the gospel to seek any intercourse with such a man. It was wrong so far to consult his feelings, as to oppose a formal and joint address, that he might be spared the pain of refusing.’