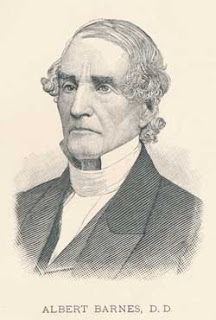 You would have thought that the writer could be trusted. Hadn’t the Notes he had published, covering all the New Testament books and some of the Old Testament, been received by over one million readers? Surely, such a response by the Christian public meant that his words were doctrinally sound. But these books were not doctrinally sound, and neither was their author, who was a minister in the Presbyterian Church, namely, Albert Barnes.

By now, hopefully, our readers know something of the Old School – New School Division in the Presbyterian Church in the 1830’s in our nation. The Plan of Union with the Congregational Church, which had been entered into in 1801 was abrogated in 1837. A key leader of the New School Presbyterian branch was the Rev. Albert Barnes.