The Westminster Assembly of Divines: Part III by William Symington

The Business of the Assembly

Having thus glanced at the origin, constitution, and parties of the Westminster Assembly, we are prepared to look at its proceedings. The Assembly was convened for the first time on Saturday, July 1, 1643, and it continued to hold regular meetings until February 22, 1649, when, instead of being formally dissolved, it was resolved into a committee for conducting the trials leading to the ordination of ministers. In this capacity is sat until March 25, 1652, when an end was put to its existence by the dissolution of the Long Parliament which had called it into being. The number of its sessions was one thousand one hundred and sixty-three, and the period of its duration, five years, six months, and twenty-one days.

The Assembly sat at first in King Henry VIIth’s chapel at Westminster, and afterwards when ‘the weather grew cold they did go to Jerusalem chamber, a fair room in the Abbey of Westminster.’ A sermon had been previously preached, before an immense audience, by Dr. Twisse, in the Abbey church, from John 14:18, ‘I will not leave you comfortless, I will come unto you.’ After having adjourned to the chapel, the roll of members appointed by Parliament was called, when it appeared that sixty- nine of the number were present. The ordinance authorizing the meeting was read, and the members adjourned until the Thursday following. When they met on Thursday, certain general instructions by the Lords and Commons for the regulation of their proceedings were submitted. Some subordinate regulations were added, and a protestation agreed upon to be taken by every member before his being admitted to a seat. The whole of the members were divided into three committees, each having its own chairman, and charged with its own peculiar business. 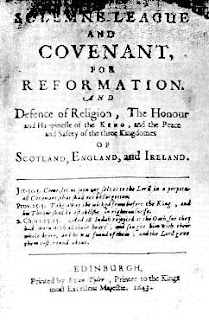 The first thing submitted by Parliament to the Assembly, was the thirty-nine articles of the Church of England, which they were requested to revise. Ten weeks were spent on the first fifteen articles; but, on the arrival of the Scots commissioners, a new turn was given to affairs, and the articles in consequence were thrown aside – not, however, until some important amendments were made upon them. The circumstance which gave a new turn to the discussions of the Assembly was the Solemn League and Covenant, which had been agreed upon by the English commissioners when in Scotland, and sent up to Parliament for their approval. The document was deliberated upon, clause by clause, by the Westminster divines for several days. With some slight alterations, it was solemnly taken by the House of Commons and the Assembly of divines, and soon after by the House of Lords and the congregations in and about London. This circumstance exerted a powerful influence over the deliberations of the Westminster Assembly. The League had for its object, not merely to secure ‘the preservation of the reformed religion in the Church of Scotland,’ but ‘the reformation of religion in the kingdoms of England and Ireland, in doctrine, worship, discipline, and government, according to the word of God, and the example of the best reformed churches, and to bring the churches of God in the three kingdoms to the nearest conjunction and uniformity in religion, Confession of Faith, Form of Church Government, Directory for Worship, and Catechising.’