Drawing from three separate quotations, we have in short compass the story of Jenny Geddes and her little wooden stool, which God used to bring about a revolution and a return to biblical truth. 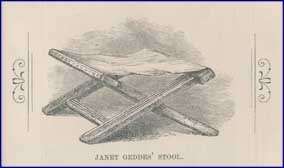 Two years ago, while walking about in Old St. Giles’ church in Edinburgh, with Dr. W. G. Blaikie, whose fame as author, scholar, and preacher, is known throughout the Presbyterian Church, he said, ― this is the first time I have been here in seventeen years. And yet this is the church in which Knox preached and Jennie Geddes worshipped. Here she threw the famous stool at the head of the Dean who was reading the liturgy, under orders from King Charles. The outburst of popular indignation, occasioned by this act, was the beginning of the great struggle for religious liberty in Scotland. 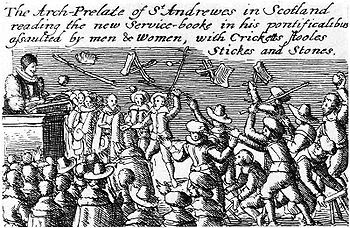 Since the early years of the 17th century, the Scottish Church had been established on the same Episcopalian basis as its English cousin, but was far more puritan, both in doctrine and practice. In 1633 King Charles I came to St Giles' to have his Scottish coronation service, using the full Anglican rites, accompanied by William Laud, his new Archbishop of Canterbury. In the years that followed he began to consider ways of introducing Anglican-style church services in Scotland. The King arranged a Commission to draw up a prayer book suitable for Scotland, and in 1637 an Edinburgh printer produced:
The BOOKE OF Common Prayer
AND Administration Of The Sacraments:
And other parts of divine Service
for the use of the CHURCH OF SCOTLAND.

These developments met with widespread opposition.

The first use of the prayer book was in St Giles' on Sunday 23 July 1637, when James Hannay, Dean of Edinburgh, began to read the Collects, part of the prescribed service, and Jenny Geddes, a market-woman or street-seller, threw her stool straight at the Minister's head. Some sources describe it as a "fald stool" or a "creepie-stool" meaning a folding stool as shown flying towards the Dean in the illustration, while others claim that it was a larger, three-legged cuttie-stool. As she hurled the stool she is reported to have yelled:

"De'il gie you colic, the wame o’ ye, fause thief; daur ye say Mass in my lug?" meaning "Devil cause you colic in your stomach, false thief: dare you say the Mass in my ear?".

This was the start of a general tumult with much of the congregation shouting abuse and throwing Bibles, stools, sticks and stones. Prebble reports the phrase "Daur ye say Mass in my lug?" as being addressed to a gentleman in the congregation who murmured a dutiful response to the liturgy, getting thumped with a Bible for his pains, and describes Jenny as one of a number of "waiting-women" who were paid to arrive early and sit on their folding stools to hold a place for their patrons. The rioters were ejected by officers summoned by the Provost, but for the rest of the service hammered at the doors and threw stones at the windows.