By Yorke Hinds - Posted at The Master's Seminary: 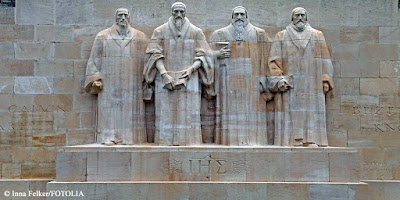 Four hundred and fifty two years ago, on May 2, 1564, John Calvin, on the brink of death, wrote his last letter. It began: “Farewell, my best and most worthy brother. Since God has determined that you should survive me in this world, live mindful of our union, which has been so useful to the Church of God, and the fruits of which await us in heaven.”

Little did Calvin know but on receiving the letter, his friend, William Farel, now 75 year old, would walk 73 miles from Neuchâtel to Geneva to visit him for the last time. A few days after the visit from Farel, John Calvin left this world and entered into the presence of the Lord.

Farel and Calvin met 28 years earlier in Geneva under the providential hand of God.

In July, 1536, Calvin was forced to spend a night in Geneva while on his way to Strasbourg. Farel, knowing about Calvin through the popularity of The Institutes of the Christian Religion, heard of the Reformer’s presence and promptly made his way to where Calvin was staying.