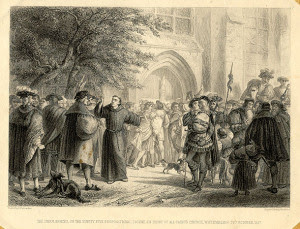 By Persis - Posted at Out of the Ordinary:

Sola Scriptura: the teaching that Scripture is the Church's only infallible and sufficient rule for deciding issues of faith and practices that involve doctrines.


A friend on Facebook posted a link to the Heidelblog - Sola Scripture ≠ Nuda Scriptura. I wasn't familiar with the term, Nuda or Solo Scriptura, so I read the post, which says:

Evangelical Christians in North America sometimes misunderstand the Reformation doctrine of sola Scriptura to mean that the Bible is the Christian’s only theological resource, that it can and should be denuded of its churchly context (hence nuda Scriptura). Such an understanding is altogether incorrect.... Calvin believed that holy Scripture as the only infallible rule of faith and practice should serve as the final authority by which to judge Christian doctrine and practice, but it was not his only resource for theology...He recognized the strategic importance of demonstrating the continuity of Protestant teaching with the core convictions of the early Church.


While believers should be Bereans and search the Scriptures for themselves, we don't do it in a vacuum. Our study of the Word is not disconnected from what has transpired in church history. Even the means by which and the theological grid through which we interpret the Word are influenced by those who have gone before us.