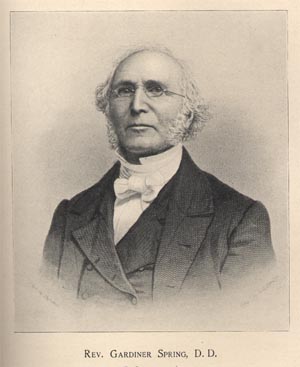 "After the Adopting Act of 1729, the deliverance known as the Gardiner Spring Resolutions of 1861 is arguably one of the most significant actions ever taken in the history of the Presbyterian Church. In essence, the resolutions required pastors and members of the Presbyterian Church in the U.S.A. to swear political allegiance to the Federal Government of the United States. By themselves the resolutions would have been controversial enough, but their proposal and enactment came just at the start of the Civil War. The effect of the resolutions was to split the Church north and south. Moreover, it cast the Northern Church in the direction of increasing political and social involvement while at the same time initiating in the Southern Church a doctrinally based aversion to social and political involvement that reigned for almost 100 years.

"Gardiner Spring was born in 1785, attended Berwick Academy in Maine and later graduated from Yale University in 1805. In 1806 he married Miss Susan Barney and moved to Bermuda where he worked as a teacher while studying law. By 1808 he left that teaching position to be admitted to the bar in Connecticut, but within a short time came to explore a call to ministry, attending Andover Seminary from 1809 - 1810. His first pastoral call was to the Brick Church of New York City in 1810 and his entire ministerial career of 63 years was served at this post. "(Source: http://www.pcahistory.org/documents/gardinerspring.html)


Posted at This Day in Presbyterian History:

With the Old School General Assembly meeting on May 16, 1861, the unity of the nation was at stake. Fort Sumter in Charleston, South Carolina has been attacked and captured. Southern states had already seceded from the Union. The slavery issue, which had been debated in previous assemblies, became secondary to the important matter of preserving the union. Thus, Rev. Gardiner Spring, the pastor of Brick Presbyterian Church in New York City, New York suggested that a committee be formed to consider the following resolutions before the assembled elders. 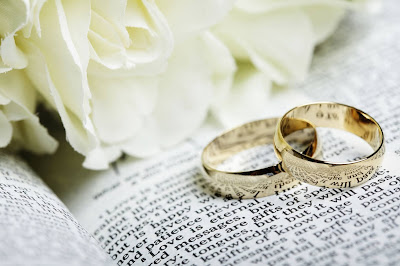