God's Ambassadors: The Westminster Assembly and the Reform of the English Pulpit, 1643-1653 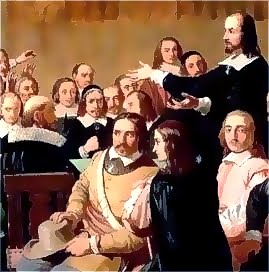 The assembly of divines that authored a famous confession of faith, catechisms, and much more, met in Westminster, now a suburb of London, in the middle of a bloody civil war that tore apart, England and Wales, Scotland, and Ireland. The English parliament, for a variety of reasons, raised an army to try to reign in the power of the king and to gain reforms in taxation, religion, and political process. The English parliament was called the Long Parliament because it met for a long time (1642-1653).

Of all the tasks assigned to the assembly of divines meeting in Westminster abbey, only one persisted from 1643 to 1653: the examination of preachers. Every other endeavour of the assembly was either abandoned or completed as the years dragged on. But from its first month to its final days, apprehensive preachers waited weekly in the antechamber next to the Jerusalem Chamber for their turn to be interviewed and assessed. They hoped to leave the abbey with a certificate of approval to enter a new pastoral charge. And they knew that it would be granted only if they approximated the kind of preacher that could play a part in the assembly's attempted reformation of the English church.