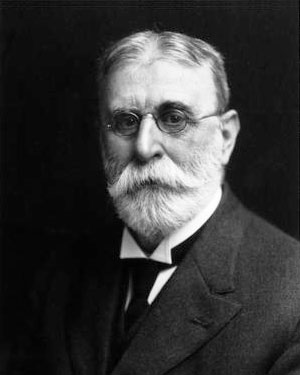 Posted at B.B. Warfield - The Life, Thought, and Works of Benjamin Breckinridge Warfield (1851–1921:

Warfield, Benjamin Breckinridge (1851–1921). The last of the great conservative theologians who defended Calvinistic orthodoxy from the chair of theology at Princeton Seminary. After his education at Princeton College and Princeton Seminary, Warfield traveled in Europe and taught NT at Western Seminary in Allegheny, Pennsylvania. He succeeded Archibald Alexander Hodge as professor of didactic and polemic theology at Princeton in 1887. Warfield wrote a vast number of articles, reviews, and monographs for the popular press and learned journals. His scholarship was precise, wide-ranging, and well grounded in scientific literature. He was one of the great academic theologians at the turn of the century, and his work remains alive today among theologically conservative Protestants who share particularly his attitudes toward Scripture.

Like his Princeton predecessors, Archibald Alexander and the Hodges, Warfield was a strict Calvinist. He wrote numerous studies on Calvin, Augustinian theology, and the Westminster Confession, both to illuminate the theological history and to advocate the positions thus illuminated. He set his Calvinism against the tides of liberalism, which he faulted for subverting God’s activity in salvation and divine authority in revelation. He was heartened by the spiritual zeal of the fundamentalists but felt that they were forfeiting rich theological resources by drifting toward anti-intellectualism. He was especially antagonistic toward the defenders of revelational religious experience, whether the rationalistic piety of Albrecht Ritschl and A. C. McGiffert, the perfectionism of the “Higher Life” and Keswick movements, or the insistence on special spiritual gifts in modern Pentecostalism. To him these substituted subjective religiosity for the completeness of Scripture. Warfield found himself increasingly isolated in his later years. He shared with the modernists a commitment to learned theological inquiry but rejected their conclusions. He shared with the fundamentalists a commitment to supernatural faith yet questioned their methods.

Warfield is best known today for his painstakingly careful efforts to defend the inerrancy of the Bible. In 1881 with A. A. Hodge he wrote a famous essay, “Inspiration,” which set out a carefully stated reassertion of traditional Protestant belief in the full infallibility and truthfulness of Scripture. In countless essays and reviews thereafter Warfield labored to clarify the Bible’s own testimony to its inspiration and to oppose those who detracted from Scripture’s infallible authority. This work on the Bible has made Warfield an important guide for conservative evangelicals in the twentieth century, even for those who do not share his Calvinism (he never wavered in rejecting the pretensions of “free will”), his eschatology (he regarded premillennialism and dispensationalism as aberrations), or his views on science (he believed evolution could be reconciled with the inerrancy of early Genesis).