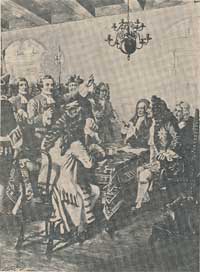 April 21 was an important date in 1649 for the Reformed faith in the colony of Maryland. Originally, Maryland was a colony established as a refuge for English Catholics. But as more non-Catholics came into the colony, and indeed it became a Protestant colony, the Maryland Assembly on this date established the Maryland Toleration Law, or as it is sometimes known as The Act Concerning Religion.

What it did was to mandate religious tolerance for trinitarian Christians. That adjective “trinitarian” is important. If a citizen of the colony denied the deity of Jesus Christ, for example, then the punishment was seizure of their land, and even death. Thus Unitarians, or Jews, or atheists were threatened by this law. It was meant more so as a protection for the Roman Catholics as it was for the Protestants, and specifically the Reformed faith.