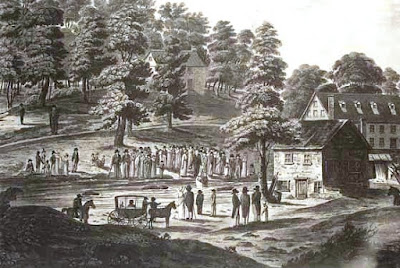 If God is going to bring a great turning from sin, it must and can only be His work.

“But it may not be improper to remark here, that for some time previous to this, everything around assumed a gloomy aspect in regard to evangelical piety. All meetings for prayer except the first Monday in the month, were relinquished. Gambling, horse-racing, intemperance, and dissipation of every kind, threatened all social order with destruction. A moral society had been established for two years, the object of which was the suppression of vice and immorality; but no human effort was able to withstand the torrent of vice which threatened us on every side. At the same time the exertions of Christians were paralyzed; the wise were sleeping with the foolish. This state of things alarmed a few praying people; they agreed to resume a prayer-meeting which had, for the first time in forty years, been relinquished the spring before. This took place about the latter part of July. For a number of weeks not more than twelve or fourteen persons attended; but such fervent and earnest wrestling with God I never witnessed. They prayed as though they saw their children and neighbors standing on the verge of destruction, and that, without an immediate interposition of almighty grace, they were lost for ever.”


Asa Hillyer was born in Sheffield, Massachusetts, on April 6, 1763. His father was a physician, who served in the army during the Revolutionary War, with young Asa attending by his side in the later years of the War.