Here We Stand, On the Word of God. 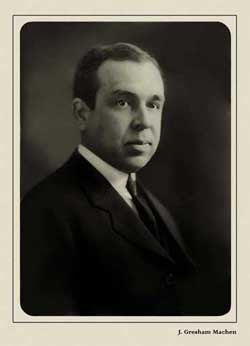 “The grass withereth, the flower fadeth; but the word of our God shall stand forever.”—Isaiah 40:8.


The following brief editorial served as an introduction to the first issue of THE PRESBYTERIAN GUARDIAN, a periodical which began on October 7, 1935 and ran up until its merger with THE PRESBYTERIAN JOURNAL in October of 1979. So much of Dr. Machen’s writing remains prescient and timely even for our day and age. Not much in the world has changed over the last eighty-one years. Humanity is still born in sin and still desperately needs a Savior. And the Word of God has not changed either. It remains the very Word of God, infallible and inerrant, our only rule of faith and life.

The Changing Scene and the Unchanging Word
by the Rev. J. Gresham Machen
The Presbyterian Guardian, Vol. 1, No. 1 (7 October 1935)

We certainly have before us today a changing scene, and very ominous are the figures that stalk across it. Twenty years after a war which was supposed to have been fought to make the world safe for democracy. Russia stands under the most soul-killing despotism, perhaps, that the world has ever seen; and despots rule also in Italy and in Germany. One of these despots, after the approved tradition of despotic rulers, is now engaged in plunging the world, so far as his actions can accomplish it, into another world war.

In our own country, a man has to be blind indeed not to see that the same forces are mightily at work. Religious liberty has not yet been destroyed among us, as in Mexico; religious edifices and schools have not yet all been taken over by government. But when teachers even in private schools and Church schools and other institutions of learning are, as in New York and elsewhere, required to take an oath of office, as though they were state officials, we have in principle the totalitarian state; and liberty, just at the most important point, I in principle being destroyed. Everywhere we find centralization of power under an arbitrary bureaucracy; the area of liberty is slowly but very surely being reduced. Solemn contracts public and private are being treated as scraps of paper; the solid foundations of liberty and honesty are crumbling beneath our feet.