By David T. Myers - Posted at This Day in Presbyterian History:

A Deluge of Pentecostal Power 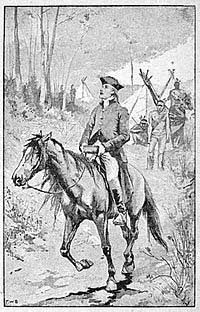 We have at various times in the course of this historical devotional turned to the Diary of David Brainerd. Brainerd was a Presbyterian missionary to the Indians, or native Americans as we would call them today, in the mid seventeen hundreds. In his short life and ministry among them, he recorded his thoughts and his actions to them and on their behalf, which diary has been used by the Holy Spirit of God to lead countless in both olden times and modern times to commit their lives to service to the Lord.

We look at one day in August 8, 1745 when in a return visit to the Indians of Crossweeksung, New Jersey, the Lord brought about an awakening of their hearts which surpassed anything David Brainerd had experienced up to this time. Listen to his words from his diary: “. . . the power of God seemed to descend upon the assembly ‘like a mighty raging wind’ and with an astonishing energy bore down all before it. I stood amazed at the influence which seized the audience almost universally; and could compare it to nothing more aptly than the irresistible form of a mighty torrent, or swelling deluge, that with its insupportable weight and pressure bears down and sweeps before it whatever is in its way. I must say . . . that the Lord did much to destroy the kingdom of darkness among his people.”