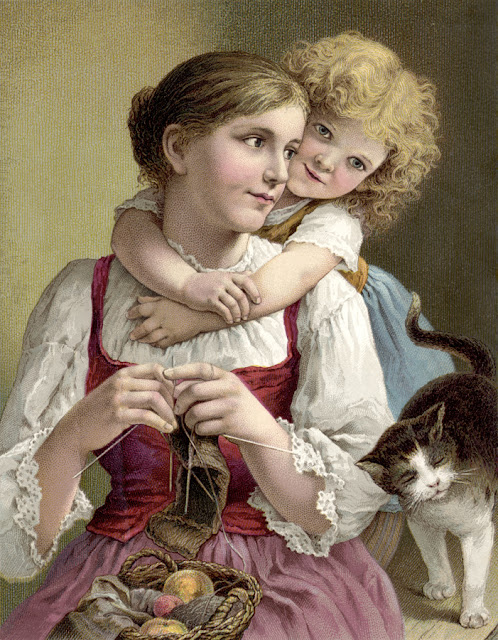 A Sermon on 1 Timothy 2:13-15, concerning the true calling of women, the honourableness of housewifery before God, and the purity of God’s ordinance of marriage; and likewise shewing the blasphemy and horrible sins into which those fall who despise this blessed vocation.

“Let the woman learn in silence with all subjection. But I suffer not a woman to teach, nor to usurp authority over the man, but to be in silence. For Adam was first made, and after Eve. And Adam was not deceived, but the woman was deceived, and was in transgression. Notwithstanding she shall be saved through bearing of children, if she abide in faith, and love, and holiness with modesty.“

A man might marvel, why God by the mouth of his Apostle forbiddeth women in this place the office of teaching, seeing he bestowed this grace upon some. For we see that Deborah was not only a prophetess, but also ruled the people of God. [Judges 4-5] Therefore it might seem at the first blush, that there were some contradiction here. But we must make a difference between the common order which God will have to be observed amongst men for a rule, and that which is done after a strange sort, and not usually. So then when God maketh a law, which he will have us keep to obey him, he derogateth nothing from his liberty, so that he may not upon occasion work otherwise, yea and that in strange and wondrous sort. For we may not make God subject to a law, because all laws proceed from his will. Not that we may imagine any thing in God but that [which] is right and just. For it is blasphemy to speak of an absolute power, as though it were without rule. Yet doth God’s will stand for a law, and what he establisheth amongst us, neither may nor can be prejudicious to him, but he may do what seemeth him best. And thus we see how God might use a woman to govern his people. And it is to be marked that he did it to despite [vex or offend] men withal, as if he would by this means shame them, because there was none of them meet to be in authority and dignity. As for example, as if he should make stones speak [Luke 19.40], were it not to pervert the order of nature? Yes surely; and yet it is a condemnation that God layeth upon men.

It may sometimes well come to pass, either in a country or city, that there shall be such a confusion of all things, that God will bring it so about even for despite, that there shall be neither wisdom nor equity, but the state shall be utterly turned upside down. If the world hold its peace, and every man stand amazed one at another, so that none of them dare speak, God will raise up some fool to speak. Yet is it not to be said that fools have cunning to be able to profit withal: but by this means God mocketh them which will seem to be wise, because they have their mouths shut, and be dumb when they should speak, and maketh them as blocks of wood, as void of life and heart, as if they were stones. Therefore God mocketh them, and shameth them, when he so openeth the mouth of a dumb man to reprove faults and offences which are committed, and which no man will see unto.

So is it to be marked, that in those days God raised up Deborah, to shew men their slothfulness when the Church was in bondage, and utterly out of hope, but yet his meaning was not to change this common order. That was a miracle, which served for that present time, and without prejudice as we have shewed. Therefore we see in few words, that God is in no wise contrary to himself, in that he maketh a law for us to keep, and in that he worketh extraordinarily of his own power, and doeth things which are not compassed, as commonly things use to be.

Women & the spirit of prophesy.

As for that which in the beginning of the Gospel he poured out the Holy Ghost upon women as well as upon men [Acts 2.17], and there were some that had the spirit of prophesy [Acts 21.9]: neither is this against that which Paul saith. For although God gave the gift of prophecy to Philip’s daughters, yet notwithstanding, they had not the office to speak in the assembly, but God used them to beautify the Gospel, and when they were in the company of women, then did they there lay out the gift that was given them: as it may come to pass in some household, that the woman shall be wiser than the man, and shall use it to the governance of the family. We see that the house of Nabal had been utterly destroyed, had it not been for the wisdom of Abigail. [1 Sam. 25.14] And thus it may sometimes come to pass: and therefore the woman that is endued with such gifts, may well do that which is her duty in all humbleness and modesty, insomuch that if there be a want in her husband, she may supply it. Yet notwithstanding the order that God hath established, must needs be kept. And this is what we have to bear away in this text. And so let us conclude that “the woman ought to be subject, and keep herself in silence,” as Paul appointeth here.