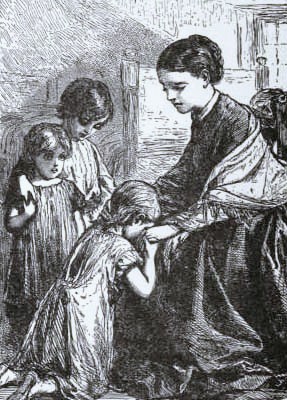 Posted at Purely Presbyterian:
John Calvin
The 19th Sermon
upon the second chapter of 1 Timothy


Objection: Pastors are subject to Magistrates, and yet they teach.

And yet a man might move a question: for Paul bringeth this argument to shew that women ought not to have the charge and office of teaching, because they are subject, neither may have authority to speak. Why then it should follow by this, that none might teach, unless he were a King or Prince. Are not the Pastors of the Church, subject to the Magistrates? Yet so it is that God sendeth them, and giveth them this commission, to govern his people, as touching the spiritual government.

The answer to this is, that a man may well in one respect be a subject, and in an other have authority: as we see how God hath separated these two things, the state of earthly governance, and the spiritual government of his Church. The Magistrates, they rule, and sit in seat of Justice, God hath given them the sword to govern his people. And because the Pastors and Ministers be members of the body, they must needs be subject to the Magistrates. Yet notwithstanding this diminish no part of the authority of the doctrine which they bear, but that they are in the virtue and name of God above all earthly highness, as it is said in Jeremiah [1.10], “I have appointed thee over kingdoms, and over all principalities.” Therefore as touching the Ministers of the Word of God, if we consider their persons as they are men, they must needs be subject to laws, they are bound to obey the Magistrates, and do them honour and reverence, but yet let them know that the Master whom they serve, hath authority and is chief Lord over all creatures, and that they speak in his name: and therefore that their doctrine is not subject nor to be bridled by them that would lift up themselves: but rather mark that which Paul saith in the second to the Corinthians: to wit, “to cast down every high thing that would lift up itself against the majesty of our Lord Jesus Christ: and bring into captivity every thought, and keep under all disorderous appetites, which can suffer no obedience nor subjection.” [2 Cor. 10.5] And thus in divers respects may one man be a subject and also be in authority.

God’s vengeance for striving against his ordinance.

But as for women, this reason holdeth which Paul brought before, that God hath set an order which may in no wise be broken, and must continue even to the world’s end. Seeing man is made to be the woman’s head, and the woman is a part and, as it were, an accessory of man, we must follow that order—and as well great as small must submit themselves unto it.

And yet let us know, that if we behave ourselves evil—and there be great confusion not only in houses, but also in the commonwealth, yea as well in the spiritual government, as in the earthly policy—let us know, I say, that God will shame us hereby, and shew us that we are not worthy. He should sit as it were in the midst of us, as only master and governor, but clean forsaketh us. As he saith by his Prophet Isaiah [3.12] that he will cause women and little children to reign, whereby he sheweth that he will cast off the preeminence, and there shall be nothing but utter dissolution and overturning of all. When matters are thus confounded, let us know that it is God’s just vengeance to put us to shame, because we are not worthy, to have him sit as ruler amongst us. Moreover, let every man in the mean season take heed to himself, and be as it were awakened, and let us follow that which is taught us here by Paul, to wit, that we strive not against God’s ordinance.