This Day in Presbyterian History: Knox's Sermon on Isaiah 26:13-21 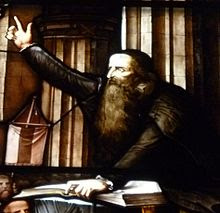 O, That All Men Would Humble Themselves in the Presence of Our God.


As you prepare your hearts for Lord’s Day worship, This seems an appropriate item to read. The following sermon by John Knox is one of the few committed to writing by him. His text is Isaiah 26:13-21. The historical setting of the sermon is explained in this preface:

“Henry Darnley (king of Scotland by his marriage with queen Mary,) went sometimes to mass with the queen, and sometimes attended the protestant sermons. To silence the rumours then circulated of his having forsaken the reformed religion, he, on the 19th of August, 1565, attended service at St. Giles’s church, sitting on a throne which had been prepared for him. Knox preached that day on Isaiah xxvi.13, 14, and happened to prolong the service beyond the usual time. In one part of the sermon, he quoted these words of scripture, ‘I will give children to be their princes, and babes shall rule over them: children are their oppressors, and women rule over them.’ In another part he referred to God’s displeasure against Ahab, because he did not correct his idolatrous wife Jezebel. No particular application of these passages was made by Knox, but the king considered them as reflecting upon the queen and himself, and returned to the palace in great wrath. He refused to dine, and went out to hawking.

That same afternoon Knox was summoned from his bed to appear before the council. He went accompanied by several respectable inhabitants of the city. The secretary informed him of the king’s displeasure at his sermon, and desired that he would abstain from preaching for fifteen or twenty days. Knox answered, that he had spoken nothing but according to his text, and if the church would command him either to preach or abstain, he would obey so far as the word of God would permit him. The king and queen left Edinburgh during the week following, and it does not appear that Knox was actually suspended from preaching.”

The following are Knox’s reasons for the publication of this Sermon, extracted from his preface to the first edition.

“If any will ask, To what purpose this sermon is set forth? I answer, To let such as satan has not altogether blinded, see upon how small occasions great offence is now conceived. This sermon is it, for which, from my bed, I was called before the council; and after long reasoning, I was by some forbidden to preach in Edinburgh, so long as the king and queen were in town. This sermon is it, that so offends such as would please the court, and will not appear to be enemies to the truth; yet they dare affirm, that I exceeded the bounds of God’s messenger. I have therefore faithfully committed unto writing whatsoever I could remember might have been offensive in that sermon; to the end, that the enemies of God’s truth, as well as the professors of the same, may either note unto me wherein I have offended, or at the least cease to condemn me before they have convinced me by God’s manifest word.”