Recommended Sermon: The Making of a Holy Nation

17 Now the first day of the feast of unleavened bread the disciples came to Jesus, saying unto him, Where wilt thou that we prepare for thee to eat the passover?

18 And he said, Go into the city to such a man, and say unto him, The Master saith, My time is at hand; I will keep the passover at thy house with my disciples.

19 And the disciples did as Jesus had appointed them; and they made ready the passover.

20 Now when the even was come, he sat down with the twelve.

21 And as they did eat, he said, Verily I say unto you, that one of you shall betray me.

22 And they were exceeding sorrowful, and began every one of them to say unto him, Lord, is it I?

23 And he answered and said, He that dippeth his hand with me in the dish, the same shall betray me.

24 The Son of man goeth as it is written of him: but woe unto that man by whom the Son of man is betrayed! it had been good for that man if he had not been born.

25 Then Judas, which betrayed him, answered and said, Master, is it I? He said unto him, Thou hast said.

26 And as they were eating, Jesus took bread, and blessed it, and brake it, and gave it to the disciples, and said, Take, eat; this is my body.

27 And he took the cup, and gave thanks, and gave it to them, saying, Drink ye all of it;

28 For this is my blood of the new testament, which is shed for many for the remission of sins.

29 But I say unto you, I will not drink henceforth of this fruit of the vine, until that day when I drink it new with you in my Father's kingdom. 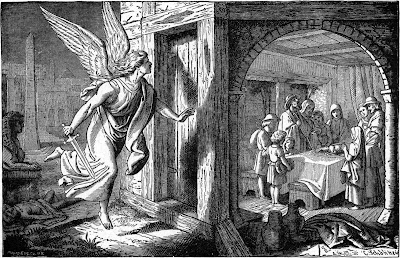