Birth of Thomas Boston (1676) - An Heart Exercised Unto Godliness 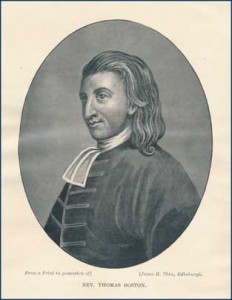 By David T. Myers - Posted at This Day in Presbyterian History:

The life of Thomas Boston could be considered a walking medical study. Frequently depressed both in life and ministry, in his autobiography he wrote of his recurring miseries, his dry spells, his sense of unworthiness and dullness even in the act of preaching, or while praying in his study. At one point in his life, all his teeth fell out gradually one by one. Try speaking or preaching with that condition! His wife even joined him in suffering from a chronic illness of body and mind. Maybe it was something in the water!

Throw in two small congregations which, when he first went to them, were unresponsive to the ministry of the Word, whether publicly or privately. The manse in one congregation was in such bad shape that his family couldn’t stay there. In the other church, for a while they lived in a stable and even had one of their infants born there.

Thomas Boston was born this day March 17, in 1676, in Duns, Scotland, with Thomas being the youngest of seven children. His parents, John and Alison Boston, were Covenanters and his father was a strong supporter of Presbyterianism, even for a time being fined and imprisoned for his proclamation of the Gospel. Thomas would keep him company in one jail. Despite his parent’s vibrant testimony, Thomas went through religious motions only. It was only later under the preaching of the Rev. Henry Erskine, father of two sons who became ministers, that the Spirit brought him to saving faith in Jesus Christ. Thomas would says, “it pleased the Lord to awaken me under exercise about my soul’s state.”